Your browser is not supported. Please download another browser to be able to use all of the Maven features.

Everyone who has used Tableau has one thing in common - they have a Tableau Story! I’ve told my story in bits and pieces to alot of people in the past, but I think it’s time to bring it all together.

I graduated from Bryant University (go bulldogs!) in May of 2009. For you Millennials (yeah I know i’m technically one too) who were born in the 90s/00s, this was pretty much the absolute worst time to graduate. The economy had just crashed HARD and there were not many jobs out there. Luckily, I ended up landing a job shortly after graduation at a company called FGX (think Foster Grant Reading Glasses) where I had various roles. Mainly, I was learning how to analyze data with Excel (and some fun green screen programs!). The tools were OK, but I definitely didn’t love my job yet.

After a couple years I made the switch to go to a big company, hello Staples! The corporate office for the $25B company was only 45 minutes from me and I was very excited to be a “real” analyst. During my 4 years at Staples I became proficient in excel, sql server, and a new program called Think-Cell. Think-Cell was a tool that my group acquired after a stint using the Boston Consulting Group. At the time, it was AMAZING - cool visuals that could be brought into powerpoint and updated on the fly in excel (I know, crazy right?). This was the first time that I was really EXCITED to do something at work. Combined with learning how to create kick-ass powerpoints, using tools to visually represent data was my “thing”.

After 3.5 years of doing bid analytics, contract negotiation support, and other analytics in excel and PowerPoint (and complaining about it) my wife let me know that I should try something else called Tableau. She had been using it at her company, Bose, for the past few years and really liked it. So, being the smart husband that I am (always try something if your wife tells you guys), I downloaded the trial for Tableau. It’s hard to put into words what my first thoughts were other than “HOLY SHIT this is AMAZING and I literally CAN’T use anything else than this!”. The main selling points for me were:

For reference, below is an image of my first public dashboard - I leave it on my Tableau Public page as a reminder to where I started with the tool: 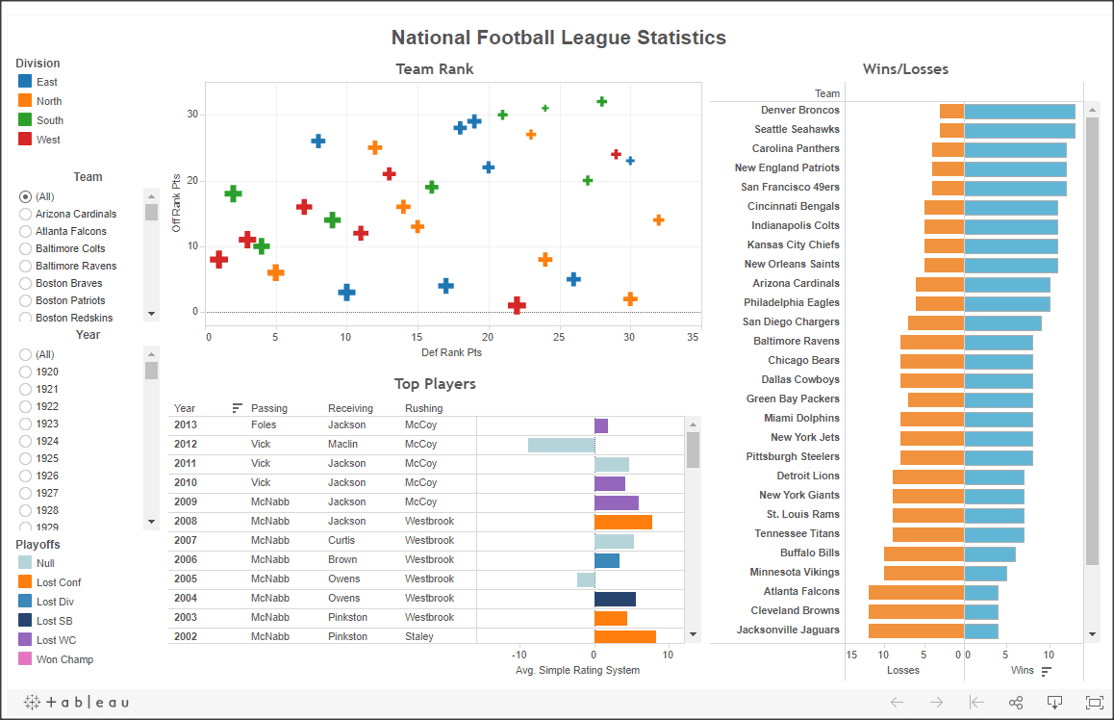 New analysts today who are given Tableau right away REALLY don’t understand the anguish and sadness that comes with pulling and populating the SAME REPORT for years on end every single week. It’s mind-numbing work that does not inspire you to get up in the morning every day. Seeing a way out of this day-to-day monotony was LIFE-ALTERING for me - I knew that whatever I did, I had to have this program for my sanity alone.

So, I knew what I had to do - but HOW to do it? My first idea was to go to my boss and ask for the money to buy Tableau for me. The answer was NO. It’s not that she didn’t see the value in my protoype dashboards, it’s just that Staples is NOTORIOUSLY CHEAP. They literally track / limit how much you could PRINT at work. This is a company that 50% of their business is INK and PAPER! She did say that if I convinced the merchants (our analytic customers inside the company) to buy the tool, that I could get it. So I went to the merchants and sold the dashboards - to the tune of $10,000 for licenses for the whole team!

Of course, it wasn’t that easy - my boss said that I should talk to the BI group before doing anything. So, I talked to the group and they of course said NO. Their reasoning was that they were investigating tools for Self-Service analytics (including Tableau) and that they didn’t want us buying Tableau until they made a decision. Now, if you haven’t worked in a big company before this might have been encouraging news, but with my experience at Staples I knew that this meant AT BEST I had a 50/50 shot of getting Tableau in the next YEAR.

Yep, it seems a bit radical from the outside looking in, but for the first time in a long time I KNEW what I wanted to do. Of course, I didn’t quit without another job - I had interviewed (using my public Tableau portfolio) and landed a new gig as a Tableau Developer at EMC! It really was a dream come true that I got a job doing Tableau (especially after not really having any production-level experience using the tool other than POCs). During the first 9 months at EMC I learned a TON about Tableau, Tableau Server, databases, and a host of other things. It was a great experience for me and I really enjoyed using a tool that truly allowed me to be an analyst.

But that’s not the end of the story…..

Phase 3: Return of the (Tableau) Jedi

It’s funny, you never know what life is going to come at you with — you think that each day will be pretty much the same with only little variation. Well, on a random Friday in December I got an email that would again change the course of my career. It turns out that Staples HAD gotten Tableau, and they needed someone to LEAD the Tableau deployment at the ENTIRE COMPANY. A recruiter had reached out saying that some of the BI team leaders wanted to talk to me about the role.

So after winging it with some proof of concepts and semi-faking my way into a Tableau role at EMC after losing hope in Staples — I had the chance to be the leader of Tableau at Staples! Sign me up baby :)

I took the interview and within a month had returned to my familiar Staples stomping grounds. It’s amazing the looks you get when you go back to a company. Right out of the gate I started implementing what would come to be the Staples Tableau community. It included a web portal, Tableau Doctor sessions, Tableau Days, competitions, usage dashboards, user groups, and much more. It was flat-out AMAZING being Tableau lead - I saw so much data, met so many great people, and learned a ton!

While at Staples (the 2nd time) I became involved in the Tableau community outside of the company. I built my blog, made a ton for my Tableau Public, started teaching Tableau at Bryant University, competed in Tableau competitions, and learned from Zen Masters. While doing this two thoughts kept coming back to into my head

Those two questions were answered one day as I had lunch with a friend I met while I was on the Tableau team at EMC. Ron was embedded on my team and had helped us develop our databases and Tableau dashboards. It also turned out that he had his own data & analytics consulting company called Cleartelligence. Ron and I chatted about my work at Staples and what Cleartelligence was doing. I mentioned that it was going well, but the recent Staples/Office Depot merger had been blocked - which left Staples future in question and me wondering what my next step would be.

Then Ron said - “Well, we would hire you right now.”

Me, a consultant? I dunno….sounds scary to “Go Pro”. Ron did his best to convince me that I would be a great fit with consulting and he said to think about it and meet the rest of the team. About a week later I met with Ron, Joe, and Anil - the 3 founders of Cleartelligence. My primary concern was quality of life and time spent with my son. They were very accommodating and assured me that Cleartelligence was a “different” consulting firm that worked hard to keep people at good accounts with great work-life balance.

After receiving an offer from the team I discussed with my wife for over a week what it would mean to make such a big change. In the end, we figured that if I was going to try consulting, it makes sense to try at a small company first. It was hard to leave Staples (again), but I had rode the Tableau rocket to this point - why not take it all the way?

Fast-forward two years later and I know that I made the best decision of my career. I’ve presented across the country, met with countless executives, built an amazing company, come to new heights in the Tableau community, and expanded my depth of knowledge more than I thought I could.

It’s funny thinking back that this all started with one little trial download at the recommendation of my wife - just goes to show that life isn’t predictable and if you get an opportunity to try something new, don’t turn it away!

To get analytics tips & tricks delivered directly to your inbox.

Ready to become a